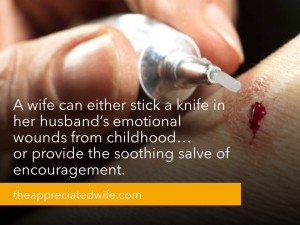 Whether we realize it or not, most husbands are actually very insecure.  Many of our men have suffered deep emotional wounds in childhood.  Some were teased incessantly at school.  Many were physically abused by their dad or grandpa.  Others were sexually abused by the neighbor man.  Some were basically abandoned by one or both of their parents.  The emotional wounds, though often never revealed openly, still exist.

Unintentionally, we sometimes take a knife to that open wound and rip it open a little further.  When a man’s wife constantly points out his faults, the wound becomes larger.  When a wife complains that he doesn’t make enough money, isn’t romantic enough, doesn’t play with the kids enough, doesn’t talk to her enough….his insecurity grows deeper.  He feels like a failure once again.  He feels unwanted, unappreciated.  He feels like he’s just one big disappointment.

Ladies, let’s truly become our husband’s helper (Genesis 2:18) by being the one person in his life that always sees the best in him…who truly believes in him.  Let’s consciously work to affirm anything and everything he does right.  Think of yourself as your husband’s biggest cheerleader.  He needs to know you’re on his team.  This doesn’t mean you should never confront him if he’s way out of line, but even then, you can confront him lovingly and respectfully.  Let’s become the soothing salve for the emotional wounds of our men!

Raul leads a large men's ministry called Band of Brothers For Christ. Debbie leads a dynamic wives' ministry called Squadron of Sisters. They both also host podcasts at Faithplace.org. In addition, Debbie writes a daily blog/devotional for wives at www.theappreciatedwife.com and gives Bible guidance to women on her youtube channel.